Hebden Bridge in the Media

'Greatest Town in Europe' - as well as being the 4th funkiest town in the world, Culture Trip gives 12 Reasons why Hebden Bridge 'is known as the greatest town in Europe'. Read article (17 May 2018)

Have I Got News for You This prime time BBC 1 programme featured the Cornholme library notice story, and its reference to 'the cesspit that is Hebden Bridge'.

The case for making Hebden Bridge the UK's second city, BBC article by Evan Davis. "Hebden Bridge is an inverted city with a greenbelt centre and suburbs called Manchester, Leeds and Liverpool." Read the article March 2014

When BBC Any Questions came to Hebden Bridge - August 2012 live from our newly re-opened Town Hall, with the first question on squatting from the HebWeb editor.

Crystal Wilde: Finding peace in hippie Hebden Bridge: "Hippies, hikers, kooky cafes, drugs and lesbians: my home town of Hebden Bridge is notorious for many reasons, some more surprising than others." See feature in The Independent (April 2021)

Huffington Post on Hebden Bridge: "You will find a town that was almost abandoned, but brought back to life by hippies, artists and lesbians looking for a place to make a life." Written by Sean Pert, who continues: "The town doesn't just tolerate its LGBT+ community, it values and embraces us." Read more Feb 2019

Hebden Bridge features in The Times list of trendiest cities, villages and market towns in which to live. (March 2015)

Australian View of Hebden Bridge: from The West Australian - "This once-dying mill town reinvented itself as a beacon of alternative living; a quirky commuter hub where artists, writers, hippies and new-age gurus rub shoulders with teachers, estate agents and earthy Yorkshire folk". Read the article. Jan 2015

Hebden Bridge: the coolest place to live in Britain, according to The Times on 19 March 2013. Read more

Hebden Bridge's "delightfully relaxed vibe"
There's nothing not to like about Hebden Bridge. Once a hippy retreat, this little West Yorkshire town might have shed its dreadlocks and wholemeal image, but it's maintained a delightfully relaxed vibe. Given all the rain we've had of late, it's looking more lush than ever; verdant greenery forms the perfect backdrop to terraces of stone houses that look straight out of a Brontë novel. It's oh-so-bucolic and oh-so-pretty, but, as the locals would no doubt remind you, capable of contemporary cool, with wine bars and traditional boozers mingling on the high street. From the Metro

"Developers and speculators have a quiet mill town in their sights. Now, its radical community is up in arms", reported Paul Wilkinson in the Daily Telegraph. Read Where there's brown rice, there's brass

"In the upper reaches of the Calder Valley lies Jumble Hole Clough, a steep wooded valley embracing a fast-flowing stream which tumbles off the high moorland. Near the head of the clough stands a mute reminder of the early days of the Industrial Revolution, in the shape of ruins of a small water-powered mill which is slowly being engulfed by the surrounding foliage." from the Guardian's Country Diary

"With its apparent seclusion from the rest of the world, Hebden has a tendency to breed introverts and other colourful personalities. It bucks the trend of other higher populated and trend- setting Yorkshire towns with effortless ease and style". From Deep in the Heart of Yorkshire by Alex Clark in Hackwriters.com 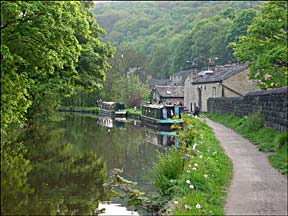 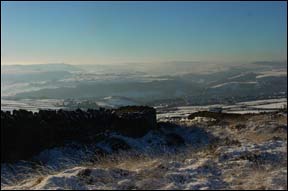 The Hebden Bridge Web is published and maintained by
Pennine Pens.