Gibson Mill in Hardcastle Crags has just completed its third transformation since it was first opened as a cotton mill by Abraham Gibson in 1800. The former cotton mill has been turned into a building which is completely self-sufficient.

The National Trust, using £1.6 million from the Heritage Lottery Fund and Yorkshire Forward, has been restoring and renovating the mill and workers' cottages to provide a visitor and education centre which will provide interactive exhibitions on the Crags themselves, the industrial history of the mill and the social traditions of its workers who worked, lived and played in the area. There will be facilities for educational groups and the Mill will also be available to the local community as a venue for workshops, exhibitions and other events. Guided walks and orienteering courses in the Crags will take place throughout the year.

The Trust is restoring the Mill as a model of sustainable development. It will be 100% green self-sufficient in energy, water and waste disposal, its only connection with the outside world being its telephone line. Electricity both for the building itself and for the workers' cottages in which some of the staff will live is to come not from the National Grid but from water turbines including the reinstated 1927 original water turbine. These will be backed up by photo-voltaic cells which convert daylight into energy and a solar roof which has been fitted on to the building which will be heated by wood burning boilers and a bio-mass stove.

Rob Jarman, the head of sustainability for the National Trust, said the mill was a “flagship” project with a ‘low environmental footprint’. “Gibson Mill provides a vision of how to marry the needs of heritage conservation with strict environmental standards,” he said.

‘Hands-on’ exhibitions inside Gibson Mill will give visitors an exciting interactive experience.The exhibitions will explore:

An unusual feature of the building will be the human powered lift. Because the site does not have a mains electricity supply installing a conventional lift is not possible. A human powered lift is to be developed instead. The lift will operate using a counter balance system of pulley and weights. The operator will be able to effortlessly pull visitors to the first floor and down again but for those who like the exercise a stair case is also available!

Lord Holme Mill — to give it its official title — was erected in the early 1800s by Abraham Gibson, a Heptonstall farmer and cotton spinner, of Greenwood Lee.

Following his death in 1790, it was his son, another Abraham, who set in motion the changes which were to transform the family's cottage industry into a much more ambitious concern; a factory was erected in the heart of Hardcastle Crags and manufacturing began in earnest.

Gibson Mill was one of the first generation mills of the Industrial Revolution. The Mill was driven by a water wheel inside and produced cotton cloth up until 1890. In 1833, 21 workers were employed in the building, each working an average 72 hours per week.

Gibson Mill in the 1920s
(Photo thanks to Milltown Memories)

After it shut down as a working mill, the building became a mini holiday centre or “entertainment emporium” with a cafe, dance hall and skating rink catering mainly for day trippers who visited what became known as “Little Switzerland” until what seemed like its final closure in 1945.

“The family line was to survive for only four generations, however. Abraham the second was succeeded by his younger son, William, who in turn produced yet another Abraham, nicknamed "Young Ab," whose death, in 1956, brought the Gibson dynasty to an end.

“But his legacy was to have far-reaching effects on the area, for it was Young Ab, who not only left a considerable sum of money to local good causes, but, perhaps more significantly, willed his Hardcastle Crags acres to the National Trust.” (Milltown Memories, summer 2003)

Since then the mill and its surrounding cottages, in spite of their setting in some of the loveliest countryside in Yorkshire, have fallen into disrepair although they have proved to be useful venues for promenade plays and in recent years as the set for Dotheboys Hall in a film of Charles Dickens's novel “Nicholas Nickleby”. 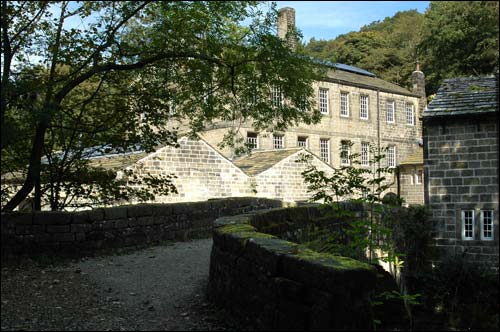 There are two water turbines, a large and a small one. Only the small one was operating as the river was still low from inadequate summer rainfall. The larger one was rebuilt from the original Gilkes turbine which used to power the mill from 1927. Water is fed to a large tank of water from the adjoining millpond. The small turbine takes 50 litres a second (half a bathful).

All power is stored in the batteries. If the large turbine is running and there is excess power generated then this is converted into heat and distributed through a sequence of dump heaters situated throughout the mill. The large array of batteries, all proudly on display in the exhibition part of the mill. 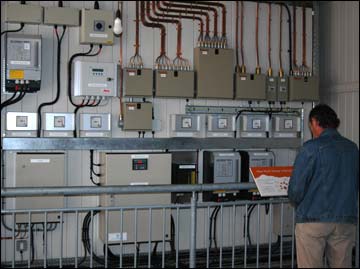 The exhibition covers three floors. The ground floor describes and displays the sustainable energy which goes to make the complex totally independent of the national grid. If some emergency were to cut off power in the upper valley, Gibson Mill could carry on regardless. 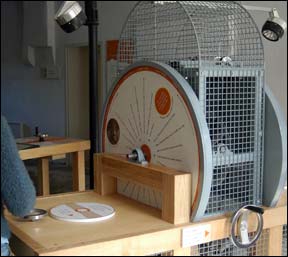 There are activities such this one to test
how energy efficient you are.

The lifts are entertaining but only for the reasonably fit. To get from one floor to the next, you have to pull on a rope to pull the lift up and down - much harder than it sounds but good fun. And of course, the lift will be essential to enable disabled people to take part in first floor activities.

The first floor is empty because it is a community room designed for educational groups, youth clubs and conferences. The idea is to keep it flexible and not to stuff it with exhibits, and perhaps to better appreciate some fine views of the Mill Pond. 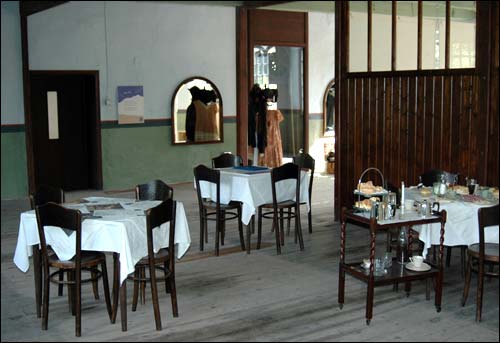 The third floor shows how the Mill was used
as an entertainment emporium after it was re-mortgaged in 1894. 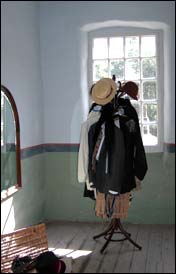 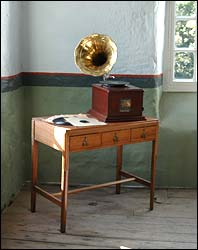 You can try on the clothes from the era, wind up the gramophone and even follow the instructions to waltz or foxtrot. 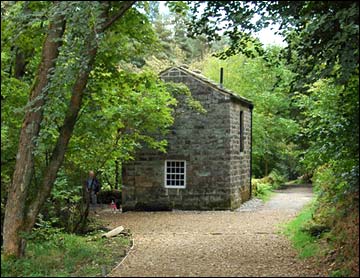 Although there are disabled toilets near the mill, the main toilets are 100 yards away over the bridge in a small house on the other side of the river. Liquids are filtered through a leach field while solids are collected in tanks and composted. 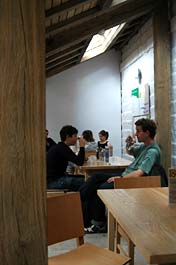 The cafe is going to be one of the most welcome parts of the re-opened mill. Walkers will be able to take a break and refreshments in a well designed tea room in the most attractive of settings.

However, visitors this weekend expressed the hope that the caterers will quickly learn from their experience of the first weekend, and perhaps from some of the excellent coffee and juice bars now peppered around Hebden Bridge. The food on offer was of the packaged muffin and too sweet flapjack variety. And even this ran out completely by Sunday afternoon. The coffee was instant!

(Since we wrote the above, the National Trust has contacted the Hebden Bridge Web: "The cafe stocks products from bakers that can prove their ethical background and fair trade credentials. The product offered is a starting point and will be built on over time. We looked into using local Hebden Bridge suppliers but nobody gave us a satisfactory response and  nobody was prepared to deliver to the mill. In addition, we do not want to supply the traditional snacks as this would generate too much waste packaging. The cakes to the mill should have come on trays not wrapped, thereby keeping this down to a minimum. We would like to sell filter coffee but are reluctant to use more machinery at the mill until we know that we have the capacity) 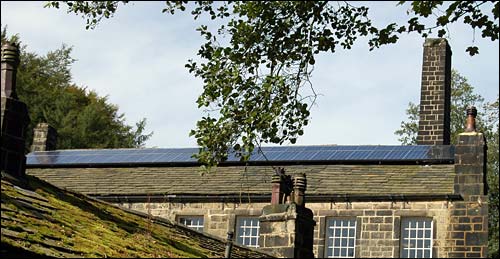 The solar panelled roof — although strictly speaking the majority of the panels on the roof are photovoltaic panels not solar panels. Photovoltaics run on light and solars run on radiation, making PVs much better suited to our climate.

Guy Laurie of the National Trust has told the Hebden Bridge Web: “This building is unique in Great Britain. Not simply a flag ship project for the National Trust, it is also a beacon for anybody wanting to run a business via sustainable means. Its size, function, lack of connection to the national grid, and the fact that we could open every day of the year all come together to give Gibson Mill its very special status. There is no other building like this run this way. It will be a Mecca for groups looking to do similar projects and will pull hundreds if not thousands of extra visitors into this area.”

Listen to You and Yours item on Gibson Mill
Wednesday, September 28, 2005

The eco-renovation of Gibson Mill
Andrew Yeats and Eric Parks who worked on the project of transforming Gibson Mill describe their work, the challenge and the solutions