Calls for climate promise from local election candidates - An alliance of local community groups and businesses is calling on all candidates to pledge to take strong action on the climate and ecological emergencies should they get elected in May. Read more (19 April 2021) 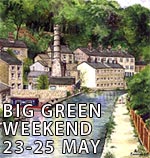 HB Climate Camp activist on Channel 4 news: Paul Morozzo appeared on Channel 4 News (13 Aug), pictured talking from the Climate Camp at Heathrow. He said that the proposed doubling of Heathrow capacity was complete madness. The ecology of the planet should be the priority. Holidays should be sustainable and we should invest in railways. The slower you travel the bigger the planet, said Paul. Paul Morozzo is also quoted in the Guardian.

The Utsira Project is moving windpower one step further. A wind turbine which powers an Utsira, an island off Norway. When supply exceeds demand, power is stored by creating hydrogen which then provides power when there is no wind.
Utsira Project
In 50 years' time no one will be using oil any more - Guardian article 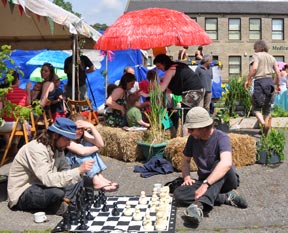 Chess in The "Secret Garden Party" which was revealed to be in The Old Fire Station. Guerilla gardening organised by the Transition Town group

Friends of the Earth's campaign for effective Climate Change legislation 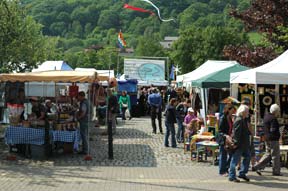 Big Green Weekend 2008
Above: Big Green Market on the Marina. More photos and a selection of the highlights. Suggestions sought for next year - see forum

For five years (2000-2005), the Hebden Bridge Web worked with the Alternative Technology Centre and Frogs Graphic Design to produce the Green Page for the Hebden Bridge Times. These are available below in pdf format.