Hebden Bridge: a Sense of Belonging by Paul Barker

Publication date: 10th May 2012.
Book Launch in Hebden Bridge: 17th May
Now in stock at The Book Case.

“A classic in the making.  It wonderfully evokes the life of one small town, past and present.  The best book of it’s kind since Akenfield.” Simon Jenkins 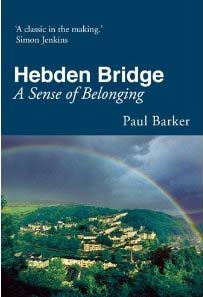 Paul Barker grew up in Mytholmroyd and then Hebden Bridge. From 1968-86 he was the Editor of the social affairs journal New Society. Those buying New Society in the 80s at Jones' Newsagents would be proudly told that the Editor used to be 'our paperboy'.

He is therefore perfectly placed to chronicle and analyse both the changes and the continuities that make our town special. His lively, colourful portrayal mixes personal and family memories with interviews, investigation and criticism. In his explorations, he meets, among others, a husband-and-wife puppet theatre company, the brass band, a local tattoo artist and a plain-speaking grave-digger. Each adds a unique piece to the social patchwork.

"Through his family, Paul Barker felt like he was related to about a third of the population. Then all the mills closed. Hebden Bridge and its surroundings could have sunk into semi-dereliction. Instead, they found a new life as what has been called 'the Greenwich Village of the north'."

What makes Hebden Bridge the remarkable place it has become? HEBDEN BRIDGE: A Sense of Belonging (£16.99) is an attempt to answer that question.  Paul Barker explains: “I have always been intrigued by what it means to talk of the ‘sense of place’.  At the heart of this isn’t just the buildings, however beautiful or bizarre they may be.  The point is the people who lived there once, and live there now.  A place is not an art object, crafted into some sort of perfection.  It is a palimpsest, forever overlaid and underlaid.  It has to be scrubbed away at, to get the sense of it.”

Over the twentieth century, Hebden Bridge’s industrial roots slowly dried up. But then, from the 1970s onwards, it was colonized by waves of artists, bohemians, New Age enthusiasts, media types and an increasingly affluent, left-leaning population.

Hebden Bridge is variously lauded and decried as ‘the fourth funkiest place on the planet’, ‘Suicide Central’, ‘the little town that time forgot’ and ‘the lesbian capital of Britain’. Such descriptions irritate, even alienate, the families who’ve lived here for generations.

These contradictions are unpacked in a series of vignettes that are, by turns, amusing, moving and insightful. Through the distinctive experiences and voices of the people who have lived here, and presented with genuine affection and curiosity, Paul Barker paints a vivid portrait of this vigorous, extraordinary place.

As well editing New Society, the prestigious weekly magazine of social inquiry Paul Barker has written and broadcast regularly on social and cultural issues.  His books include:  Arts of Society (2006) and The Freedoms of Suburbia (2009).  He is a senior research fellow of the Young Foundation.

Book Launch: A Sense of Belonging by Paul Barker

A talk by Paul Barker about his new book

On Thursday 17th May at 7pm

Wine will be served, entrance is free.

More on this fascinating, new book about our town when we've had a chance to fully digest our review copy

Independent - "a microcosm for local life buffeted by the winds of change.