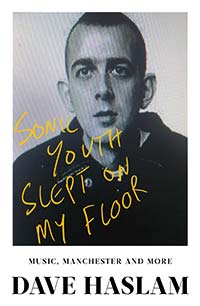 DJ Dave Haslam is in the hot seat

Hacienda DJ and best-selling writer Dave Haslam will be in the hot seat during a no holds barred interview about his memoir Sonic Youth Slept on My Floor; Music, Manchester as part of Hebden Bridge Arts Festival.

Dave made his name as one of a band of trailblazing DJs who transformed Manchester’s Hacienda into one of the world’s most famous clubs, and he played over 450 times at the legendary venue.

He has since DJ’d worldwide including shows in Peru, New York, Berlin, Barcelona, and Italy, but more recently he has turned his hand a ‘Close up’ series of interviews talking to interesting celebrities. He has done ‘Close Up’ chats at the Trades Club interviewing Dexy’s Midnight Runner singer Kevin Rowland and Everything But The Girl’s Tracey Thorn for the Arts Festival.

Now the tables are being turned as Dave will be grilled by Reverend and the Makers frontman Jon McClure at Hebden Bridge Little Theatre on Friday 22 June followed by the two of them joining forces to DJ into the early hours at the Trades Club.

In his memoir Dave documents encounters with larger than life characters including Tony Wilson who threatened to shoot him , Nile Rodgers, Terry Hall, Neneh Cherry, John Peel, Mark E Smith, Ian Brown, and John Lydon.  He will talk about Morrissey coming round to tea, having a gun pulled on him at the Hacienda, a drug dealer threatening to slit his throat and the night legendary New York noise merchants Sonic Youth kipped on his floor.

In a rich musical life Dave attended Joy Division’s last ever show back in May 1980, took John Peel to see Public Enemy, had Neil Tennant introduce him to Tracey Emin as well as appearing in the films 24 Hour Party People and in Carol Morley’s The Alcohol Years.

Turning his hand to literature he is the author of ‘Manchester England’, a groundbreaking study of Manchester’s radical and musical history, penned ‘Not Abba’ as an alternative history of the 1970s more recently ‘Life After Dark: A History of British Nightclubs & Music Venues’.

Arts Festival Artistic Director Helen Meller said, ‘As well as all his many achievements as a DJ and author Dave has become a fantastic interviewer so we thought it would be fun to turn the tables and get him to answer some questions.

“Jon McClure is an artist who speaks plainly so we are expecting it be a lively exchange. which might carry on into the night as they debate which records to play in their joint DJ set.”