David Burnop:
40 years as The Doctor

Only 40 years ago.
Blondie on the radio.
That woman got to number ten.
Public sector out again.
Walkman played the latest sounds.
Vicious never came around.
Three Mile Island critical.
Saddam gets political.
Trivial Pursuit invented.
Production of the MG ended.
First time we have MEPs.
Say goodbye to Gracie Fields.
StarTrek gets a movie pic.
Hit Me With Your Rhythm Stick.
Voyager was out in space.
The Doctor revives Heptonstall Pace Egg.

Heptonstall Players would like to congratulate David Burnop on his 40th year as The Doctor, and invite you all to toast his health, and continuing endurance, in Heptonstall at The Pace Egg Play on Good Friday 19th April 2019.

This year the collection will be for the Mytholmroyd Scouts and the British Red Cross Yemen Crisis Appeal.

Parking in the village is very limited.

"It’s said to be the oldest drama in the world, dating back to ancient Egypt and performed by many civilisations across the centuries.

"Now the Pace Egg Play is confined largely to the Calder Valley where it has become an established tradition, played out in all its gory glory on Good Friday.

"Each year, without fail, St George takes on contenders such as Bold Slasher, the Black Prince of Paradine and Hector, aided and abetted by other equally outrageous characters such as Toss Pot and the Doctor." Milltown Memories 3 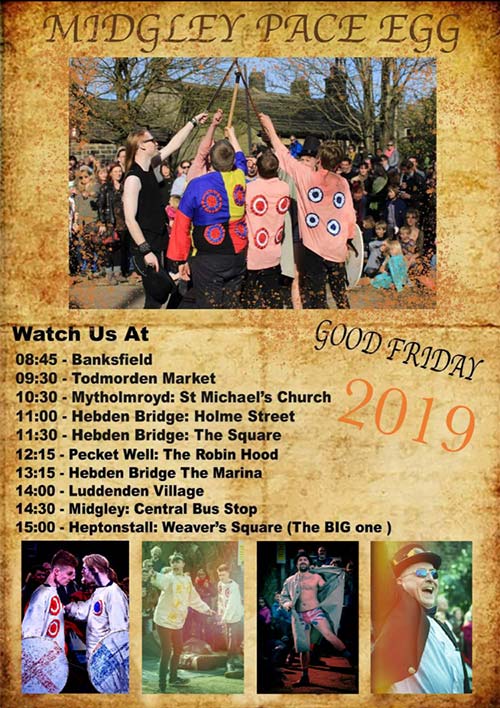 Photos from the 2018 Pace Egg Play

Photos from the 2017 Pace Egg play