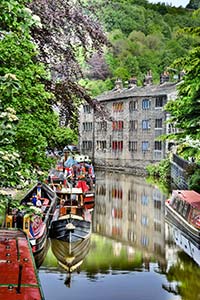 More than thirty boats belonging to members of the Historic Narrow Boat Club (HNBC) came to Hebden Bridge from all over the country at the Bank Holiday weekend. There were many events, including an assembly at Riverside School  where club members explained to the pupils about the historical importance of the canal and how it started the growth of the town. 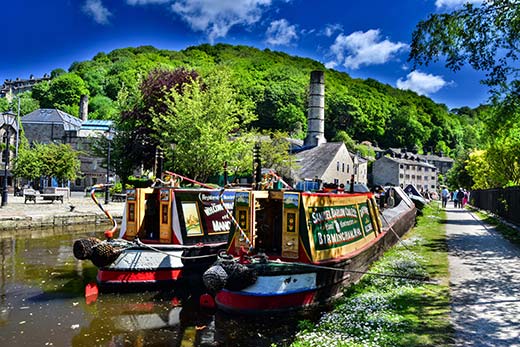 The boatmen and their families lived on their highly decorated boats in a tiny back cabin. The pupils and staff were taken onto the towpath to see all the historic boats and to experience life inside a back cabin.

On Saturday the boats made a colourful feature for the pop-up Canal and Kite Festival jointly organised by Canal and River Trust, Pennine Prospects and Hebden Royd Town Council.

David Lowe, one of the HNBC members, provided an organ recital for the club and local people at St James’s Church. This was well-attended by more than 80 people, and raised £465 for the church organ fund. The music was wide-ranging, from light music to classical. 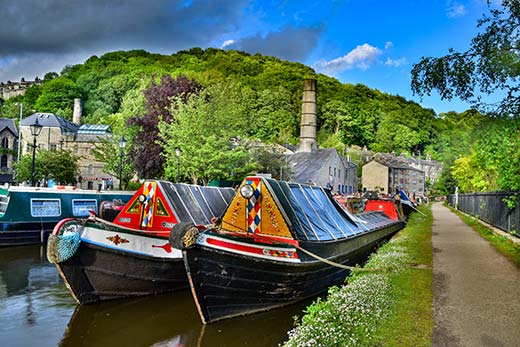 Thanks to Trevor Smith, Club members were able to meet at Machpelah Works for talks given by Mike Clarke on canals of the North and Peter Thornborrow on historic buildings of the Upper Calder Valley. Films of the local area were shown by Nick Wilding. Also, a canal-themed quiz and a grand auction of canal-related artefacts took place. This raised over £420 which will be donated to a Rochdale Canal project. The weekend finished with a guided walk in Heptonstall, led by club member Diana Monahan.

The visiting boats will be leaving over the next week or so. For many boaters it was the first time they had been to the Rochdale Canal and the Upper Calder Valley and well worth the effort of struggling through parts of the canals in Manchester. They have all enjoyed being at Hebden Bridge and would like to thank the local people for their warm welcome, wonderful places to eat and drink and interesting things to see.

Photos of boats by Andy Smith of The Smithery B&B