Following discussion on the HebWeb Forum, the National Trust has sent the HebWeb a statement about the demolition of the Pavilion near Gibson Mill in Hardcastle Crags.

After standing for 120 years, the National Trust has taken the sad decision to take down and remove the old wooden pavilion close to Gibson Mill on the Hardcastle Crags estate, in Hebden Bridge. 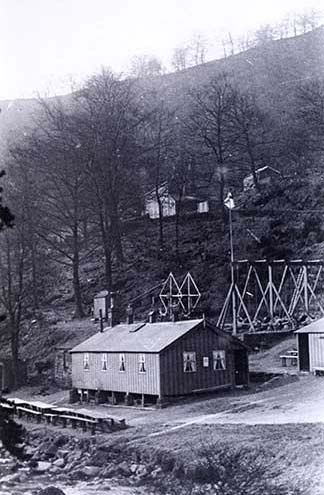 Thanks to Molly Sunderland for sending the HebWeb this photo

Originally built in c.1890, its wooden nature means that it was never designed to be a permanent structure, and, in spite of hopes to save it, it must now be demolished. The pavilion has been scheduled for demolition this week and will take up to a week to remove fully.

In spite of losing the pavilion, every stage of the demolition will be closely recorded, for historic and archaeological purposes, with the intention of celebrating its past. Recording the history of the building and any significant findings from its removal will help to build a picture of its time and how it was used.

Judith Patrick, General Manager at Hardcastle Crags, told the HebWeb, "Hardcastle Crags was once home to a number of pavilions like this, but sadly, because they were made from wood, they have not stood the test of time. In its heyday, the mill pavilion was a coffee house across from the mill next to swing boats and a Ferris wheel, but it has sat empty for a number of years now, after last being used as a holiday cottage.

It is sad that we cannot save it, but we had to choose between restoring and effectively creating a new structure, or letting it go completely. The choice in the end taken from us, as the wooden structure had become so decayed, it was deemed unsafe. Assessments showed that over 90% of the wood was completely rotten."

Whilst the pavilion will soon be gone, it will not be forgotten, promises Judith. "We want to celebrate its past. During the removal, we'll be recording everything that we can from the demolition - from wallpaper and paint scrapings to any artefacts that may have been hidden or lost in the pavilion."

Recording the demolition will enable the National Trust to build a picture of the time when it was used at the turn of the 19th century. Judith explained further

"We hope by recording, we'll be marking a footprint of how this and other buildings of the period looked and were decorated around the Hardcastle Crags estate. We plan to do further research and host an exhibition looking at the social history of the area in the summer of 2015."