Hebden Bridge in The Guardian: "New school in Hebden Bridge to teach children using yoga and meditation" - see below for HebWeb news story 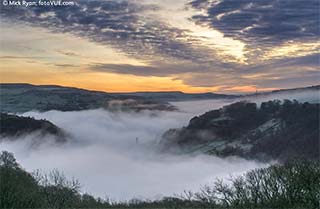 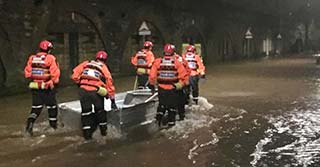 Flood warning sirens were tested at 2.45 pm on Thursday. 12 Nov

Hebden Water, Sun am, 15 Nov - updated
With thanks to Ralph Nimmann

Guardian on HB Times and Tod News merger - at the last audit in 2012, the HB Times was selling a little more than two and a half thousand copies a week. (The number who visit the HebWeb each week is much much more)

The First Film - with Q&A. Was the film industry born in Yorkshire? That's the question asked by David Wilkinson in this enthralling documentary into the origins of cinema. Picture House. 9 Aug. See What's on.

Move Parliament to Hebden Bridge, argues Professor Tony Travers in today's London Evening Standard. "With both MPs and peers in Parliament and the Queen in Buckingham Palace facing the possibility of decamping while renovations are made to their historic homes, is it now the time for power to shift in the UK?" To Hebden Bridge? Read article 25 June

Open Studios Weekend: over 90 local artists will be opening their studios and homes. 3-5 July. See What's on.

HebWeb reader Andrew Bibby has told us that Roy Palmer, whose obituary is in The Guardian, as well as being the author of some inspirational books on folk music and working class song, was also for a time a teacher at Calder High and a Calder valley (Colden) resident. (20 April) 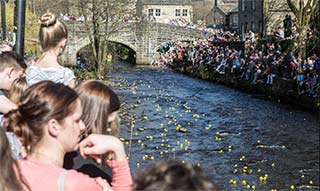 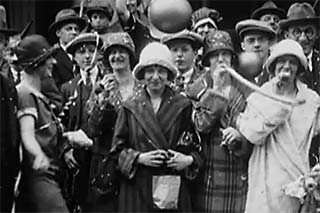 The 'Handmade Parade' of 90 years ago. See 2 min video of the 1924 Hebden Bridge Carnival from Yorkshire Film Archive, together with background info.

One woman protest in the Square - Christine Drake explains to HebWeb readers why she is there - "in solidarity with the Palestinians" - and recounts some of the abuse she has suffered during her 6 months of demonstrating. See HebWeb Forum thread 21 Jan

Australian View of Hebden Bridge: from The West Australian - "This once-dying mill town reinvented itself as a beacon of alternative living; a quirky commuter hub where artists, writers, hippies and new-age gurus rub shoulders with teachers, estate agents and earthy Yorkshire folk". Read the article. 16 Jan

Craig Whittaker's Wikipedia page edited anonymously from the House of Commons. A reference to our MP's arrest for allegedly assaulting his son outside a petrol station was deleted, along with his claim to not know about the future of A&E. See the Wikipedia edits and this page from The Political Scrapbook (26 Jan)

Buried at Sandy Gate: Two long-forgotten graves of leading 19th century co-operative figures have been made accessible to visitors, thanks to efforts taken by a community-based co-operative - CROWS. Read article in Cooperative News

eBook from Pennine Pens - Theatre in a Time of Change - by Hebden Bridge's Michael Prior. This is not a book about stars and plays, but about the rise and fall of the theatre as a cultural and economic art-form since 1945. Read more

Hebden Bridge features in The Times list of trendiest cities, villages and market towns in which to live.

Schools rebuilding: Craig Whittaker secured an adjournment debate in Parliament on 9 March over the need to rebuild Calder and Tod High schools. He got short change from the Education Minister. See Parliamentary report 10 March

Lindsay Rimer: 20 years after Lindsay's body was found in the Rochdale Canal, her sister Katie, has spoken publicly. "From the beginning we have been filled with grief and we cannot stop the grief and instead, remember her with love until this comes to an end," she said. See BBC report and HebWeb Feature

Eclipse of the sun: Local photographer Bev Manders took this photo from Calder Holmes park. With glasses or filters, the eclipse was visible for most of its duration here in Hebden Bridge. 20 March 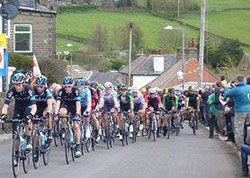 Tour de Yorkshire through Pecket Well - above photo from Jill Liddington: see also, this YouTube video from Jason Elliott. (3 May) 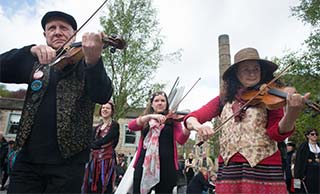 Musicians were all over the streets of Hebden Bridge for the weekend of the Folk Roots Festival. Photo: Bruce Cutts

Following uproar on Twitter and Facebook, the row has reached ITV, the Mirror and the BBC. See BBC news item (5 May) 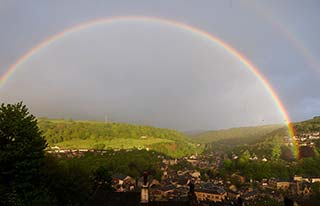 Nicola May, the only Conservative councillor elected to Hebden Royd Town Council has been disqualified for not accepting the post within the prescribed time period.

Craig Whittaker a Mormon? At the swearing in of MPs, our MP requested the Book of Mormon to pledge allegiance to the Crown, according to this BBC News report (21 May)

Wadsworth Boundary Walk took place on Sunday, 31 May. Wadsworth is the second largest parish in the country. See What's on for more info about this and other events.

BBC News: West Yorkshire Police to get £1.5m to review 'cold case' murders, including that of Hebden Bridge's Lindsay Rimer

Arts Festival - Above: photos from Craig Shaw of first couple of days of Arts Festival: Poet Lemn Sissay and part of the trail of decorated trees throughout the town centre 28 June 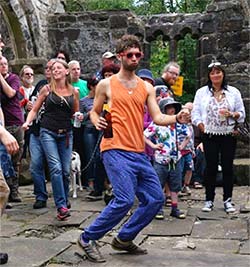 Heptonstall Festival: graveyard fun in the old church ruins, on 4 July. Thanks to Bev Manders for the photo.