A woman, old before her time, answered the door to the flats. I asked if Nicola Murphy, the nurse, lived there. She looked at me for a while, then said, ‘You’ve put weight on.’

Her name was Helen and my niece had asked her to look after me till she got back. We drank a cuppa in her kitchen. She said she was in my year at school, ‘I had ginger hair.’

A memory came back to me. A game of Alli-oh! one primary school playtime in the 50s. The boys had caught all the girls, apart from a grinning, ginger haired lass. The captured girls lined the wall behind us, calling out for her to rescue them, whilst us boys fanned out into a defensive line, waiting.

Then Ginger Girl ran at us, a will o’ the wisp, jinking, dauntless, sidestepping and darting.

No boy could grab or keep hold of her and when she touched the wall she shouted 'Urky, 1,2,3!’ and the girls all scattered, screaming triumphantly and Ginger Girl escaped with them.

I told her the Alio story and I said when I saw Georgie Best play at Old Trafford a few years later, he reminded me of that snake-hipped girl. We fell silent for a second, in awe of lost youth. Then she leaned across the table and stroked my face.

After catching up with Nicola, I drove back to Hebden. I was passing Holingworth Lake before I remembered another Ginger Girl back then; a shy lass, late developing, ignored by us lads in our Secondary Modern, a timid girl whose name I couldn’t recall, who hadn’t even gone to my primary school - perhaps that girl was Helen and I wondered which Ginger Girl had stroked my face.

Holding hands with the five year old after school, I hear about two dolls.

Harriet is a model and she’s probably going on a photo shoot and she has two suitcases and changes of clothes and wears high heels and sunglasses.

Betsy on the other hand is a hairdresser who has a case with wheels on for her home visits and she’s got a battery powered hair dryer that makes a noise like a real one and you have to press one button to make the noise but you should press the other button to save the battery after a while and could she have Betsy for her birthday?

And she said her class had been to Bankfield Museum and they got them to play old time games and her mum gave her £2 and they could buy an old time game if they wanted and so she bought nine marbles and when we get in would me and granny show her how to play marbles and I think to myself  me and granny might have trouble getting down on the ground and up again but in the car I distract her by playing Where did you come from Cotton Eye Joe? which she sang fast with a good ol’ cowboy twang and I think she loves this song because it’s set at her speed and when I try to get a word in edgeways she reminds me I’m not allowed to say 'dewberry' if I can’t remember the proper word or it’s a point to her.

Before they tidied up Stanney Park, the local farmer grew wheat there and one sunny summer’s day when I roamed there with the twinnies, the corn was taller than we were. Somehow we got split up and though I shouted for the twinnies, I was on my own when I came to the pond that was surrounded by trees and covered in green lichen. That flat surface looked perfect as a palace floor.

But when I stepped onto that floor every particle of me was shocked as I plumetted. I dunked down up to my neck, and noticed with grievance that the world, with its distant busy noises, carried on regardless. Even the busy bumbling about insects in their little pond world didn’t miss a half beat when I sploshed in.

I squelched back to our house, decorated in pond weed, leaving wet footprints along the hot pavements, passing staring, but a bit too English to say anything, adults and then a few dumbfounded kids back in our street.

Me mum stripped me and washed me and buffed me with towels by the kitchen sink and shouted, with a vehemence I hadn’t expected at the girls when they tried to burst in, ‘Get out! Get out! … And don’t tell your father!' 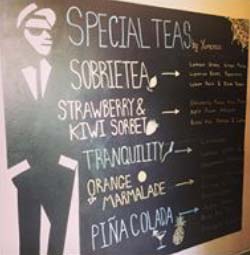 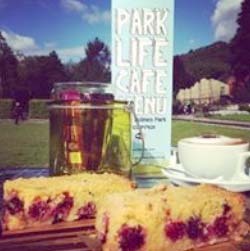 This week’s award goes to Park Life Cafe. As well as clever wordplay on their Special Teas board, they once displayed a Winston Plowes art piece and memorably hosted Rupert Everett, the magnificent Elwens and other gay and straight folk and their well adjusted offspring in a TV documentary.

This week, Charlie (who I don’t really know) helped me when I couldn’t remember the name of my favourite ice cream. She patiently brought me a long list of exotic ice cream flavours and there it was at the top. ‘I’ll have vanilla please.’

She was 4, growing out of her eczema, but any food with eggs in the ingredients made her sick. We didn’t give her nuts, just in case - particularly not peanuts. We had that legume in the house, mind - in sealed jars with a mixture of less deadly nuts, sultanas and raisins. One teatime after school, I gave her some slices of orange and a few raisons to try and she liked the raisins enough to ask for more. I hadn’t returned with the plate when she said, ‘My lips are hurting.’

When granny checked, her lips had become cartoonishly bloated.

Her mum drove as fast as she could from her work in Halifax along stop start Burnley Road. When she saw her she did what we should have done and rang 999. Little lass was brave, but bewildered - her airways were closing. The ambulance men walked in, called her darling and she panicked a bit as one swept her up and half ran, carrying her to the ambulance where they pumped a steroid into her leg. They hit Burnley Road and turned the sirens on.

Later, recovering in hospital, she was proud of her still inflated Orville lips in the mirror.

Our neighbours’ son has the same condition. They worry about him going to parties, restaurants, eating fast food, about untrained staff, foreign holidays, language difficulties and bad food labelling. They think of all the ordinary parts of teenagers growing up - those times when you let your guard down on nights out: that one time you just act like everyone else that could be fatal. A deadly new peril is stalking our kids.

With a crayon, I was trying to draw a horse on the living room door, but it kept coming out as scribble. Then, ponderously - as if trying out a new limb - I downstroked a curved blue line. A horse’s foreleg appeared. I pressed on a wadge of torso, three more legs, bent contrary-wise into a gallop, a strong neck and, raising my chin in equine affinity, a proud horse’s head. I signed off with a flourish of tail. A blue horse galloped across a creamy plain.

We lived in Dunkirk Street, where the ruddy bricked houses opened out to encompass small twin fields. It was a street like an amphitheatre to a young kid. I ran onto the nearest little field, smacking my backside like a composite Roy Rogers and Trigger. The heat stopped me.

The road was dancing at the end of our street. The sun, the size of a half sucked sweet, vibrated with effort. An aeroplane droned fitfully somewhere, as if invisible hands clamped on and off my ears in that game we sometimes played. I searched the huge sky, too blue for crayoning, until I saw a tiny silver flash, impossibly high. Then I heard the twinnies laughing…

In 1989 I was due to make a school visit, but the teacher was sick and my visit was put back. So I attended my first ever storytelling event. Betty Rosen had taught part time in tough secondary schools in Tottenham, where she told her pupils Greek myths, such as Tantalus and Orpheus and Eurydice and Italian folk tales, such as The land where one need never die … and old British tales, such as The Fisherman and the Selchie. Her pupils loved them, retold them, rewrote them, acted and illustrated them and each retold those stories in their own particular way.

To get us teacher lot started she asked us to jot down and then share our first memories.

My story was really two memories I cobbled together, about my first drawing that wasn’t scribble and about the twinnies and Big Clifford …

The twinnies were playing with big Clifford on their front lawn and they’d taken all their clothes off. They were hollow backed, with little pot bellies, lined with veins, like the rivers on a map. Big Clifford must have been 6 or 7. When he leaned over me his sticky out ears were pink and almost transparent with suffused sunlight. He said, ‘Why don’t you take yer clothes off, George?’

Taking off my clothes was like shedding a skin I felt so bare. The grass tickled the soft, naked soles of my feet. Then the twinnies and me ran round and round the little lawn, clamping our hands on and off our mouths and shouting ‘Whoo - whoo whoo - whoo whoo!’ like the Indians in cowboy films.

Then Clifford said, ‘I know, why don’t yuozz put grass up yer bums?’

Our front door opened. Me mum came out and we dived for cover behind the twinnies’ variegated privet. Between the legs of the little hedge we could see me mum walking down our path. She shouted, ‘Geo-orge! Your dinner’s ready.’ She surveyed the shimmering street.

The twinnies snorted with suppressed laughter and me and Clifford hit at them to be quiet.

Me mum shouted again, ‘Geo-orge, your dinner’s ready!’ The street was silent in reply. I wanted to run out to her and say, ‘It’s alright mum, here I am!’ But I couldn’t, because I was stark naked - with grass up me bum …

In response to an enquiry from a man who makes delicious pizzas, I hope to do turns at H the Poet’s Pensylvania Open Mic at The Fox and Goose on Tuesday, 16th June at 7.30 and on Wednesday, 17th 7.30 at Karva Cafe, Todmorden.

*First Memory was recorded on the day and appeared as Grass in Betty Rosen’s Shapers and Polishers, (1991) Mary Glasgow publishers.