Carols in the Square. On a fine Christmas Eve evening, hundreds and hundreds packed the square to sing, accompanied by the Junior Band
- click photo to enlarge.

This Manchester Evening News page remembers 20 Dec, 1984 when a freight train carrying petrol derailed in the railway tunnel near Walsden.

Save our Shops, no Sainsburys demo in the square, Saturday 29 November. Photo, thanks to Craig Shaw. Click to enlarge.

Bernard Ingham describes our town as "my now unrecognisably trendy native Hebden Bridge" in a Yorkshire Post article entreating readers to vote Conservative at the next election. (10 Dec)

The Hole in the Wall's future was decided by Calderdale's planning committee on Tuesday 18 November. Permission was granted for change of use. See Planning Watch and Forum for background.

On 20th and 21st November, Santa were joined by the Mayor of Hebden Royd and the Mytholmroyd Gala Queen to push the button. See What's on for more info.

Yorkshire Post article: What happened to all those yellow bikes (23 Nov)

Up the Buttress: Rain didn't stop those wanting to cycle up the Buttress Saturday, 6th September. See HebWeb coverage of this annual event over the past few years.

Local History Talks planned for the the autumn and winter months, starting with Valley of a Hundred Chapels: How non-conformists shaped our world. Above: Stone laying at Foster Chapel. See What's On.

NHS debates. The HebWeb has been informed that there will be four debates on NHS services for Calder Valley to be held between Labour's Josh Fenton-Glynn and Tory MP Craig Whittaker in September.

Eastwood Recycling Centre will be closed today until further notice due to a man running amok with a JCB, causing extensive damage. See ITV video

No Commonwealth Flag at Town Hall: Hebden Royd Town council has voted week not to fly the Commonwealth flag while 4 out of 5 of its nations criminalise homosexuality! (July)

New Environment Secretary was Calder Valley candidate for the Conservatives in the 2005 General Election. Liz Truss was narrowly beaten by Christine McCafferty, and then moved on. See Forum comments from March 2005. (15 July)

Marking the centenary of the start of World War I, this glorious miscellany of comedies, adventure films, travelogues and newsreels recreates a typical night out at the cinema in 1914. See What's On for Sunday, 3 Aug, 4.30pm

This weekend, 2nd-3rd August, the Rotary Club once again hosts the Hebden Bridge Vintage Weekend. More info and times about this annual event.

A northern Banksy? Sylvia Plath on a bike. The drawing above on the side of the Shoulder of Mutton was one of several by street artist Stewie which were featured on BBC Look North.

John the Barber, and artist: a video portrait

Hole in the Wall plans withdrawn. Calderdale councillor Dave Young has this afternoon told the HebWeb that the planning application is now showing as 'withdrawn'. See Planning Watch and Forum (4 June)

A and E closure: Huddesfield Examiner report that proposals will be delayed following objections and pressure, especially from Calderdale MBC. Read story (11 May)

"Happy Valley: The dark side of Hebden Bridge" - article in Yorkshire Post. "The idea came to me after I watched Shed Your Tears and Walk Away", says writer Sally Wainwright. (2 May)

Electioneering in the Square: With just 12 days to go to the local and European elections, the Labour Party were out in force yesterday. The HebWeb has written to each of the local candidates inviting them to tell HebWeb readers why we should vote for them. (Click photo to enlarge)

Fantastical Cycle Parade in Tod on Saturday, 26 April. See gallery from Craig Shaw. Crazy wheeled contraptions, a good many of them pedalled by people from Hebden Bridge. See also: this YouTube video and a report from ITV.

Historian Jill Liddington, who lives above Hebden Bridge, spoke on BBC Radio 4 today about the boycott of the 1911 census by suffragettes. Listen now (8mins). More info about Jill's book on the 1911 census. (3 April) 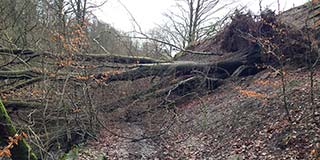 Path blocked near Salem: the waymarked path to the Crags has been blocked by the fall of a large beech tree, in between the cricket ground and bowling green. Click photo to enlarge. (9 Feb)

Hole in the Wall for sale again.

Following the recent successful campaign against closing the cobbled route outside this former pub, the owners have put it on the market for £390,000 - see details

Floods petition: calling upon the Government to extend grant offers to areas such as Hebden Bridge who were so badly affected in 2012

Woman's Hour: Chris Green, director of the Mytholmroyd based White Ribbon Campaign discusses men and violence, and feminism, during the first few minutes of this R4 programme (14 Jan)